My schedule sometimes makes eating a chore. I never really know what time meals should be at; when I wake up at 2pm, I’m ready for food right away but that often messes up the timing of other meals, which means I am hungry a lot.  In fact, I get hangry.

I am also a fast food professional.  No, I don’t make any money from working in fast food . . . but I am an expert at ordering and knowing what’s on the menu of most places I frequent.  I get really frustrated with people who take a long time to order their meals.

This particular day was no exception. I was on my way to Kings Island and I stopped at Arby’s. There was a minivan in front of me and he was taking an exceptionally long time to order his food.  His tiny dog was also sticking its head out the window and I was finding myself more and more annoyed – especially now that the employees were fawning over the dog.

They actually gave the guy a dog biscuit, which I didn’t know was a thing. Then they handed him his sack of food. He handed it back.  Oh. For. Crying. Out. Loud!  I’m really getting mad, now, and saying things like “Come on!” probably louder than I should have given both of our windows were rolled down.  “Why aren’t they pulling him up?!” I asked myself – again at a higher volume than was necessary. 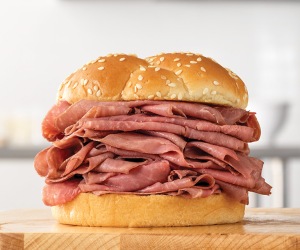 I see him hand them something else. Then they come back with his food again in a new bag and they hand him back his card.  “You mean, he ordered something else after he got up here?!  “KNOW WHAT YOU WANT WHEN YOU PULL IN OR DON’T PULL IN, YA JERK!”  I may have shouted that towards the car in front of me.  I was livid. And so hungry.

I finally pulled up to the window.  “Yessir, did you have the #12 Double with Potato Cakes a Medium Coke?”  I sighed.  “Yep,” I said, thinking who else would have ordered that? I’m the only car in the entire drive thru.

He then said, “No payment. The guy ahead of you took care of your meal today.”

Of course he did.

Kirk Sheppard is a blogger, with a variety of interests.  On select Mondays, he posts “Monday Memory” posts where he tells stories about his life.  Other topics on his blog include “Saturday Q&A’s,” “Spiritual Sunday,” and his monthly “2020 Vision” feature-length articles.